This term saw the first of our monthly sixth class assemblies. The topic of our first assembly was ‘Empathy’ and was expertly led by Mr. Hughes. Hopefully our sixth class boys will take the important lessons from this event and can apply them to their lives at school and at home. 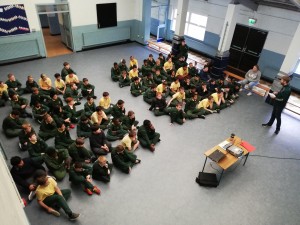 Our sixth classes at the ‘Empathy’ assembly.

On Friday 25th October our school received a visit from members of the victorious Senior Football Champions Newtown Blues. Louth star Andy McDonnell and former St. Joseph’s pupil Thomas Costello visited classes with the Joe Ward Cup and to talk to our boys about the importance of fitness, team work and focus. They also congratulated the members of our own winning football team. Go raibh maith agaibh agus comhghairdeas to the Newtown Blues!! 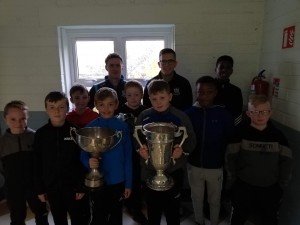 Wednesday 25th of October saw a famous win for our U-13 footballers. Our team faced off in a tense local derby against St. Paul’s N.S.

Conditions were windy but clear as both teams took to the Blue’s pitch and the conditions played their part in what proved to be a game of two halves.

St. Paul’s started as the stronger team in the first half and created many opportunities to score. They showed great skill and determination but the St. Joesph’s defence was equal to any test that was thrown at them! With a little bit of luck and a lot of excellent defending the teams went in at half time level at 0-3 to 0-3.

The second half proved to be the difference between the teams. St. Joseph’s came out and showed all the skills they have been working so hard on in training. Fantastic passing, fierce but fair tackling and pin-point accurate scoring were all on display from the St. Joe’s boys. Their wonderful second half display saw them rack up a second half score of 3- 8 while limiting their opponents to just 0-2.

When the final whistle blew the score board read St. Joesph’s 3-11 St. Paul’s 0-5. There was jubilant scenes from  players, pupils, parents and all members of our school community who turned out to support our lads! Finally the cup was hoisted by our inspirational captain to the cheers of all present!

The team would like to thank our opponents, the referee and Cumann na mBuncscoil for making the day possible and all parents and families who have supported the players since the beginning of the year. The players will continue to train hard to improve their skills and teamwork!! 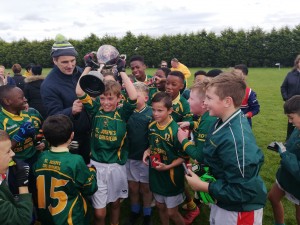 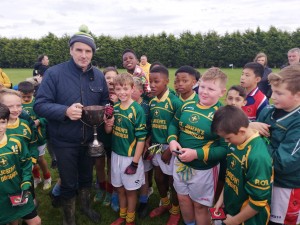 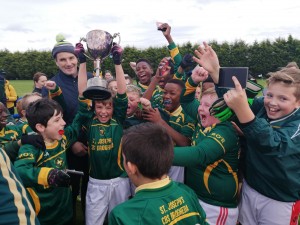